Boulder was still a sleepy little college, “hippie” town in 1971 when my cousin (Tom Stephenson), Tommy Bolin, and I, all arrived back. It was summer, and Amadeus’s return home had coincided perfectly with my cousin’s arrival and his recent audition with Tommy.  My cousin Tom had been working with a guitar player back in Kansas who was a close friend of Tommy’s. The friend had recommended Tom as someone who might be a good candidate on keyboards for Tommy’s new band. Tom played Hammond organ very well, and also was proficient on the Wurlitzer electric piano. He seemed perfect for the job, and just what we were looking for.  So, the three of us, along with drummer Bobby Berge, (the drummer from Zephyr), started rehearsing our new jazz/rock fusion band, “Energy.” We had taken our name from the title of a Jeremy Steig album that Jan Hammer, Eddie Gomez, and Tommy had been working on back in New York. We liked the name Energy, mainly I think because it implied power, something we all wanted.
What a musical Mecca Boulder seemed! Steve Stills and his new band Manassas had recently relocated there, as had Joe Walsh, Chris Hillman, Dan Fogleberg, Rick Roberts, and many others.  Jim Gercio’s Caribou Ranch, a new palatial Rocky Mountain recording studio, was attracting the likes of John Lennon, Elton John, Three Dog Nite, and The Beach Boys. At Tulagi’s nightclub on the “Hill” in Boulder, our band would get pick-up work with the great blues musicians that came to town. Our band “Energy” had an in with Colorado’s top promoter, Barry Fey (a famous CO promoter and our manager); but to our credit, we were the ones most qualified for the job. Dig it, in the space of three or four months, Barry had arranged for our band to back up, in consecutive order, Albert King, John Lee Hooker, and Chuck Berry!
The first gig that Barry lined up for us was playing with Albert King at Folsom Stadium, University of Colorado, in Boulder. This was definitely the largest crowd I had ever played to, five or six thousand. It was an incredible gig, mainly because Tommy and Albert really hit it off. They were trading “licks” verbally as well as musically, and it was precious to watch. Tommy used an electronic effect called the Echo-Plex, (Jimi Hendrix had made the device very famous). In essence, it is a tape-looping device that allows a player to record one or two bars of music. The recorded lines keep repeating while the player is then free to add other musical parts over the original. Tommy and Albert were trading fours during one medium tempo blues shuffle, everyone was playing well, and Tommy started using his Echo-plex. Albert stuck to his traditional funky electric blues, nothing fancy, just a good amp and a great tone. He seemed to like what he was hearing though, and between vocal lines he and Tommy kept trading fours. This “improv” session could only have happened if Albert liked what he was hearing. Mr. King knew very well that Tommy was using electronic gimmicks, but neither one of them felt threatened by the other. Albert had been around, and he respected the new electronics, in fact, he seemed enchanted by what he was hearing. All of a sudden Albert stepped up to the mike and says to the audience  “Man, this kid can play” then turned to Tommy and said grinning, “but you got that “gadget”. They were having a blast with each other grinning and playing, we were all grooving hard. All in all, this was a very special day. Albert’s sound is so unique because he plays his Stratocaster left handed, with the strings upside down, and the unorthodox tuning configuration gives his sound its own “built in” special effect. Also, Albert had very strong fingers, and one of his trademarks was his ability to bend notes as much as five semi-tones. Stevie Ray Vaughan is just one of many great guitarists who have copied Albert’s stinging attack and famous five note bend. 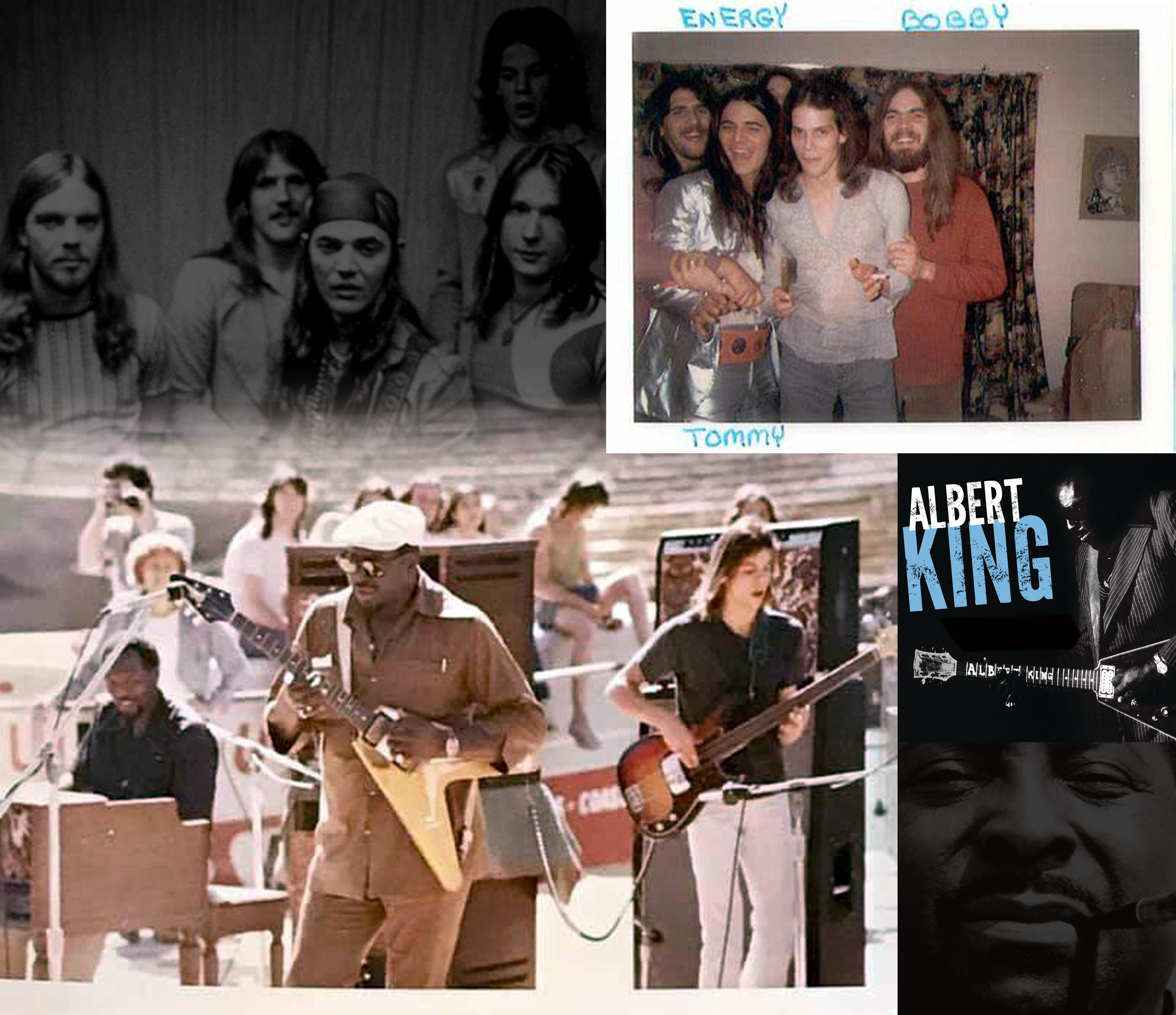 Albert obviously liked our band, because he invited us to continue the tour with him down to Colorado Springs, rather than picking up new musicians there. The shows all went well, and what a wonderful lesson we had in playing the blues. I’ll never forget how elegant and dignified Albert looked, sitting back stage in his funky fedora, serenely smoking his pipe, a true master.
It really was quite an incredible string of events: a couple of months later we started our engagement with John Lee Hooker. This gig lasted for three or four nights at Tulagi’s, on the hill in Boulder. Back in 1971, John Lee Hooker was still playing small venues. Amazing at it seems, (and it is embarassing to admit it) here in our own country, John Lee Hooker and the rest of the great blues masters, were not widely appreciated. In the late sixties and early seventies it took people like Eric Clapton, Peter Green, and Keith Richard (all British musicians) to convince American kids that blues music was cool. That is a sad commentary on a country whose only true art form is the blues, and, by extension, jazz. Well, at least here at home in America more people were starting to catch on.
It was such an honor to play with John Lee Hooker. My cousin Tom and I had heard the Animal’s cover of “Boom Boom” back in 1964, and we had tried to play it then in our first garage band. Now, we were on stage playing “Boom Boom” with John Lee Hooker! Next, Hooker calls out “One Bourbon, One Scotch, and One Beer.” And we jump right into it. This is a classic Hooker tune in the key of F#.  I think everything was in F#, that’s John Lee Hooker’s key. Tommy would tune John Lee’s guitar for him and we would play a couple of warm-up songs before the “master” hit the stage. The most important thing I learned while playing the relentless one-chord boogie shuffles with “Hooker” was that good players must have patience. Mozart said it best: “The silence between the notes are as important as the notes themselves.”
The last great treat for our band Energy that year was a “quickie” one-nighter playing with Chuck Berry at the Denver Coliseum. Chuck came into the arena at the last minute (anyone who has ever played with him knows this routine). He usually plays about half an hour, maybe 45 minutes, if he includes an encore; and that, only if his special encore fee has been paid. Always in cash – usually with an advance before he hits the stage. Chuck drives his own rented Cadillac, often alone, but on this particular night he brought a leggy, platinum blond with him. Chuck Berry seemed like a caricature of himself – greased, shiny black hair, combed in the most amazing pompadour (one that would make Little Richard green with envy). He didn’t waste any time and asked us if we knew his songs. Honestly, if you know one Chuck Berry song you know them all. And of course we knew them all. He gave us a quick backstage demonstration of body signals that he would use for signaling endings, then we hit the stage. The only song I didn’t enjoy playing that night was “My Ding-a Ling,” Chuck’s insipid little novelty tune, who only God knows why became a hit. Playing with Chuck Berry was, however, a great honor and one I’ll always cherish, but playing with John Lee Hooker and Albert King seemed even more prestigious; both the “elder statesmen” seemed much more serene, and at ease, than the younger and more volatile Chuck Berry. Maybe we just didn’t get to know him well enough… he was gone after half an hour… I guess Barry Fey didn’t pay the encore fee. 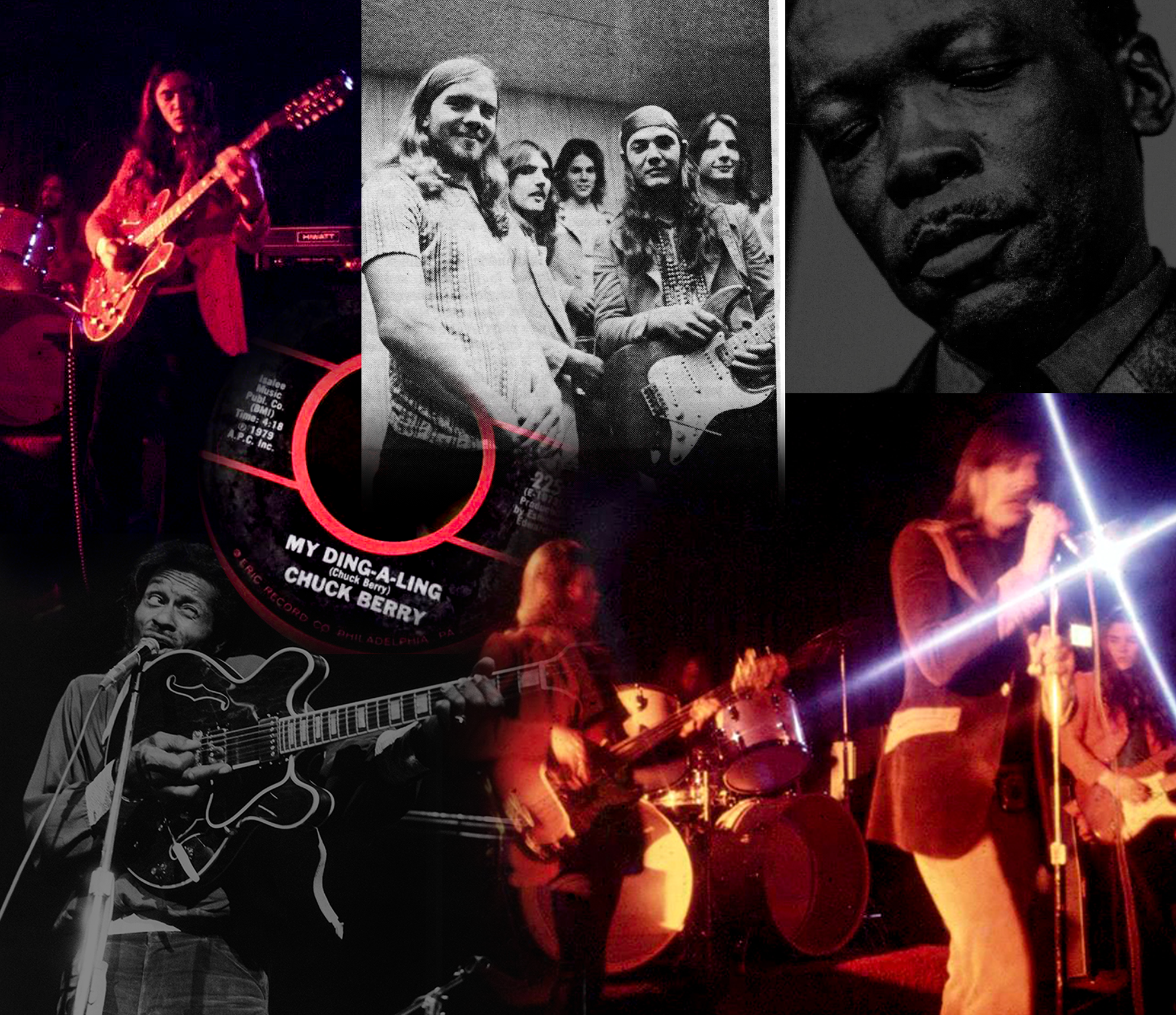