After arriving in LA, Tommy Bolin started attracting attention, mainly because of the recent success of the Billy Cobham recording (Spectrum). On the strength of that work alone he was becoming a much sought-after session player. Dr. John liked Tommy, and invited him to one of his recording dates (see video below). I quickly discovered that I could ride Tommy’s coat tails! Since I was Tommy’s bass player, Dr. John had consented to letting me play on the date as well. I was getting somewhere. James Taylor’s guitar player Danny (Kootch) Kortchmar was on the session, and so was Alphonse Mouzon, another really good fusion drummer out of the Billy Cobham mold. Alphonse was best known for playing with fusion guitarist, Larry Coryell, but also for being the loudest drummer on the planet… he really was. Besides that distinction, he used to carry around in his wallet pictures of all the women he had slept with. There were hundreds. Made his wallet look like a brick… it was very funny, and impressive we thought, sort of like the Wilt Chamberlin of the music world.
We were staying at the Continental Hyatt House on Sunset Strip. The hotel’s clientele consisted mainly of aspiring actors, comedians, and local musicians, and often, when tours came to town, real rock stars made it their home as well. The general mayhem and mix of eccentric personalities was not quite as exaggerated as in the movie “Almost Famous,” but it was a crazy mix nonetheless.  Alphonse was good friends with Jimmy (J.J.) Walker from the hit television show, “Good Times”.  These two brothers would traipse around the lobby, cruising for girls, wearing their North Beach leather suits. They were Dyno-mite! During our stay at the “Riot” house we would sometimes jam with the hotel lounge band, as did many of the other musicians who were registered. We would practice new ideas, incorporating them into our impromptu jams, then try to use the ideas in the studio later on. Ricky Fatar was still helping us out, and the three of us had started recording some of Tommy’s new songs over at The Beach Boy’s Studio (Brothers Studio) in Santa Monica. This was a very productive period for us, and many of the songs that we made demos of as a trio would later be included on Tommy’s first solo album, “Teaser.” Ricky had introduced us to Carl Wilson (Beach Boys), who would stroll around the studio, serenely surveying the situation. He was a soft-spoken man of few words, but on occasion would make insightful suggestions about the sound or the arrangements. I was also fascinated with Mike Love’s meditation/yoga room; but it seemed oddly out of place, and I remember wondering: what the hell does he do in there? No one was allowed to enter that room either… it was all very mysterious indeed.
So Tommy went his way – and I went mine. We were going to reunite sometime in the not-too-distant future. I started practicing Peter Frampton’s repertoire in earnest. I had to fly to New York in order to audition with the entire band... talk about nervous. I had never been East of the Mississippi River. New York seemed like some kind of hallucinatory dream when I arrived there in the spring of 1975.  There was a torrential storm the night I flew in to La Guardia airport. I took my first New York City cab ride to the Gorham Hotel on West 56th street, and all through the trip I kept trying to peer up at the dark gray skyscrapers through the rainstorm… impossible. So this was New York City. (Continued below...) 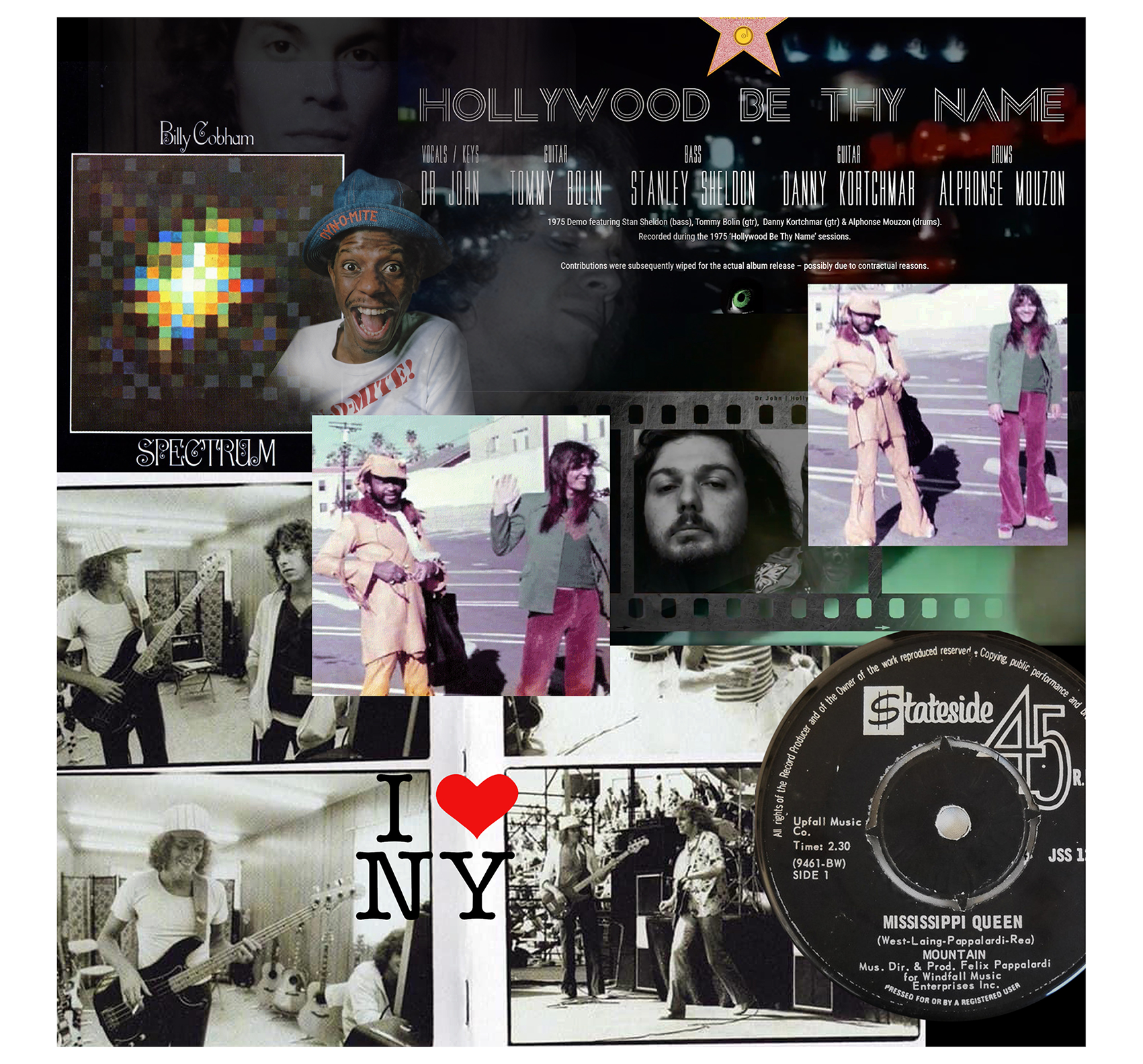 Stan Coles, the bands’ road manager, was a character right out of Monty Python mold. He had been working both sides of the Atlantic with a number of different bands. With Frampton, he had been handling the work of three people, he was road manager, called the lights, and helped to mix sound out front in the audience. Suffice it to say that Stan Coles was a pro. When I arrived at the hotel that night he broke the ice with his droll British humor. I was taking a hot bath, getting rid of the chill from the rainstorm, when he suddenly scared me to death by asking where my bass was – I panicked, and said “what, you mean it’s not here? He was chuckling and I realized that he was just initiating me, “Of course it’s here you wanker,” he said. Then he asked me if I would like some tea. I was not a tea drinker yet, but I had the feeling that I was about to become one. “Sure,” I said.  When the hot tea was ready, he pulled out a little bottle of cognac and poured a little bit in his cup. “Want some” he said. “Yeah, why not,” I replied. The nightcap helped us relax. I was exhausted from the long flight, and before I knew it we were both turning in for the night.
The next morning the sun was shining brightly as Stan Coles and I made our way the few blocks over to (SIR) Studio Instrument Rentals. New York City was resplendent in the sunshine. I was starting to love it already. The first person I saw at SIR studios was an enormous man with long dark hair, tottering around, precariously balanced on his impossibly high platform shoes, and talking to Peter about guitars. I had seen this guy before in concert back in KC. It was none other than Leslie West, the guitar playing gargantuan from the rock band, Mountain. Their hit, “Mississippi Queen,” had made quite an impression on many a rock fan. But to me, they sounded suspiciously like Cream, you know, the other power trio, formed by Eric Clapton, Jack Bruce, and Ginger Baker. Mountain mirrored Cream’s image and its sound, but it was more like a mirror from the house of fun. Leslie’s overweight (250 at least) figure standing in stark contrast to the rail-thin bass player, Felix Pappilardi. The two of them stalking around the stage, seemed like a piece of spaghetti trying to sneak up on a meatball. And then there was their drummer, Corky Lang. Corky was best known for having a roadie whose sole function was to supply him with the ammunition/drumsticks that he would systematically hurl to his exuberant fans (about once every 20 seconds), while Leslie bleated out their one-hit-wonder,
‍
“Mississippi  Queeeeeen – she taught me evrythaaaang.”